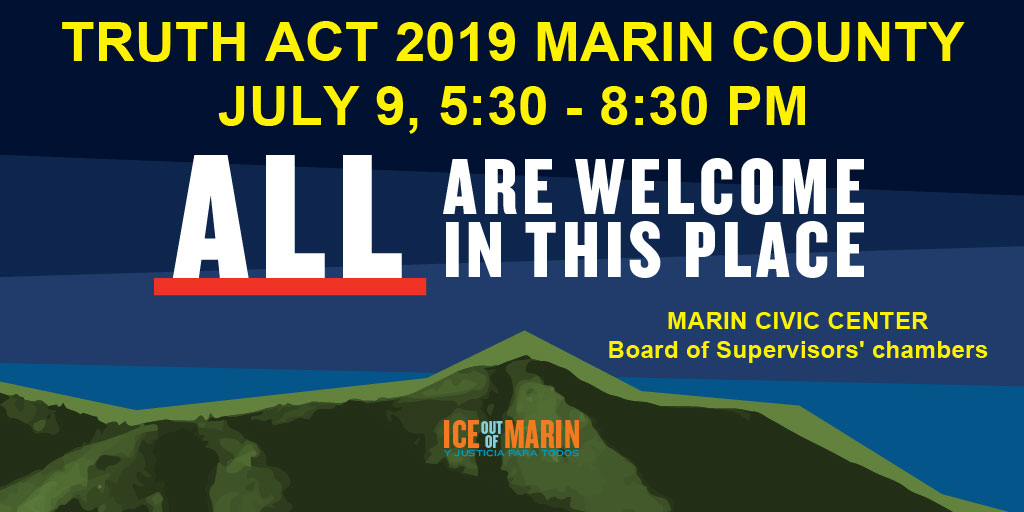 Last December, ICE Out of Marin, in partnership with multiple grassroots partners and the Marin County Board of Supervisors, organized Marin County’s first TRUTH Act Forum.  By any measure, it was a tremendous success, with hundreds of Marin residents showing up to support Marin County immigrants.

We proved that Marin County Sheriff Robert Doyle is sensitive to outside pressure.  Just days before the TRUTH Act Forum took place, Sheriff Doyle announced a shift in Marin County Sheriff’s Office policy which would limit the circumstances under which he would contact ICE.  This is significant because the Marin County Jail is the main source of deportations in Marin.

Since then, the Sheriff has reported a substantial drop in the number of Marin County inmates picked up by ICE from the Marin County jail.  Upon closer inspection, however, we have many questions about whether or not inmates transferred to ICE were transferred even though they may have had no convictions, only open charges.  This is not in the spirit of SB 54 and is allowing our Sheriff to act as judge, jury, and executioner.  Unchanged is that ICE still picks up inmates from inside the County Jail.  ICE is still proactively notified of upcoming release dates.

If those numbers are what they seem, we should be pleased that our pressure has pushed Sheriff Doyle in the right direction.  Nevertheless, the changes made by the Marin County Sheriff’s Office are not enough.

We must keep the pressure on Sheriff Doyle to STOP ALL COOPERATION WITH ICE!

The Marin County Board of Supervisors has agreed to host a 2nd TRUTH Act Forum on Tuesday, July 9th at 5:30pm in the Board of Supervisors chambers.  This is an important opportunity to keep the pressure on Sheriff Doyle to keep all Marin residents safe – including immigrants.